Baithaks in Pushtimarg religion are holy places where Shri Vallabhacharya, the founder of Pushtimarg, and and close bhakt and sewak of ShreeNathji, narrated the Holy Bhagvad Katha. They are total 84 in number and spread all over the country. Mahaprabhuji had circled the whole of India three times and done sthapna of these various Baithaks.

Each Baithak has its own particular Charitra (description).

Baithaks are holy places where there is no Idol or Chitra (Picture); sewa is done of Gaddi (Seating).

Baithaks are a very important pilgrim place for all Pushtimarg bhakts, as Shri Vallabhacharya is their primary Guru.

Here are some pictures  from my visit to the 20th  Baithak of Mahaprabhuji, located at Vraj Mandal 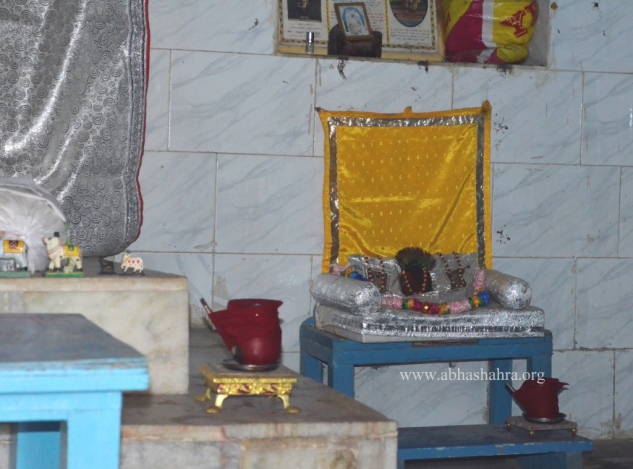 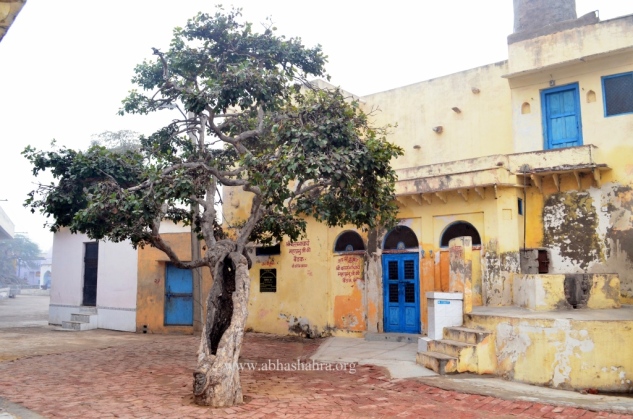 Krishn Kund at the Baithakji

The Mukhiyaji who does sewa here

View from the Baithakji across the Krishn Kund. Cows grazing!

In spite of irresponsible destruction of the land in various ways, they have not been able to destroy the divine vibrations

It was on Vaishak Vad Giyaras (11th) in Vikram Samvat 1535, or AD 1478; in Satbhisha Nakshatra on a Thursday; during the Abhijit mahurat, 12.40-1.00 in the afternoon; when ShreeNathji’s Lotus Face Appeared from Govardhan to give His divya Darshan to the lucky people of the village; According to Shree Krishn’s desire, on the same day but in the Abhijit mahurat, 12.40-1.00 at night, Shree Vallabhacharya also appeared at Champaran in a ring of fire.  (Details of his life and teachings, can be read on my website: http://www.shreenathjibhakti.org, http://www.shreenathjibhakti.org/brief_sketch_vallabhacharya.htm

(This detail about the Baithak is  taken from the website  http://blog.nathdwaratemple.org/ )

Here by the Krishn Kund, under a tree, Mahaprabhu Vallabhachayra resided for one month discussing the Shrimad Bhagavatam. Their Chaturnaga a disciple of the Nimvark Sampradays approached Mahaprabhuji and said, “we have heard that you support the path of Devotion as taught by Vshnu Svami and have debated and defeated all the Mayavadians in the south. Please shower you infinite grace on the thousand hermits living here by feeding them all rice pudding.

Chaturnaga seeing this amazing pastime prayed, “you are no other than the Lord Himself. I was ignorant of your true form, but now I pray t be made you disciple.”

Shri Mahaprabhu replied, “you already have a guru, but by the grace of my grandson, Shri Gokulnathji who will appear in the future, you will enter into the path of Grace.”

Chatrunaga questioned, “what will be my condition intil then.”

“You will live for 150 years and then my grandson Shri Gokulnathji will shower his grace on you during your 110 th year.”

For many years, Chaturnaga wander about in to holy preceints of Vrindavan always absorbed in the Lord’s divine remembrance. Once, while rambling about, his hair got tangled on a branch and for three days he could not free himself. Then Shri Krishna came and untangle his hair. During that time, King Jahangir order that all Tulsi necklaces worn by the Vaishnavas not to be worn. Chaturnaga fell a victum to the order and fhad his necklace removed. Shortly later, Chaturnaga passed Shri Gokulnathji in Mathura. Shri Gokulnathji called, “Chaturnaga, although we are married people, we did not take off our tulsi necklaces. How is it that you a hermit had yours removed?”

Chaturnaga prostrated before Shri Gokulnathji and holding on to his feet said with welling eyes, “After so long a wait have net you. Kindly accept me as your disciple and give me Tulsi necklace.”

Gokulnathji knowing the promise of Mahaprabhu Vallabhacharya made Chaturnaga his disciple. From that time, Chaturnaga always went about sing the glories of his guru. At the age of 150 he dropped his body at Govinda lake by the Govaradhan hill and enter into Krishna’s lila.

Nearby Railway Station:Mathura (From Nandgaon 5 Km.)