Ganpati  Visarjan is a big festival in our city. But as you see from these few photos, the same Idols, which once adorned our homes and worshiped with a lot of love and bhao, today lie alone and desolate in the midst of dirt and grime.

In Ganpati festival, there is a pratha of doing Ganeshji sthapan at home or in a community mandal. Bhakts celebrate with a lot of bhao; and depending on the desire of the family, keep this murti from 1-10 days. It is really sad to see what happens to some of these Ganpati after the family has done visarjan of this same Ganpati Baba Idol which they had bought to their home with so much love.

I feel extremely disturbed (and so would all of you) when I come across these God Idols (I have many more photos of other God Forms too), lying helpless and alone in dirt and grime.

For future Ganpati festivals, if we wish to  avoid subjecting our Gods to this situation, I can think of two solutions.

First is to use only Murti made of clay, as this dissolves completely and, according to our scriptures is the right material to be used. Plaster of paris etc materials should not be used.

Second solution is to use a metal Murti which can be stored and used again for many years.

(It’s just a suggestion, I mean, there can be as many arguments about this)

(These photos which you see here are from March 2014; so even after 5-6 months of Visarjan the murtis are yet being tossed back by the sea). 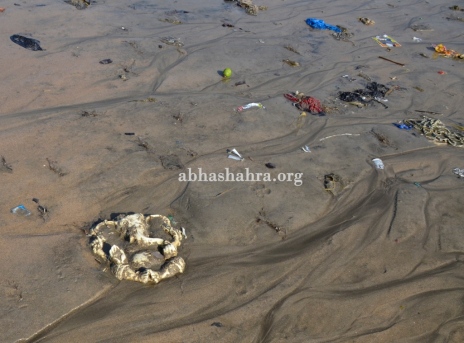 Ganpatiji lying with the dirt and filth from the sea. Is this the right kind of immersion? We need to be very careful about how we treat our Gods 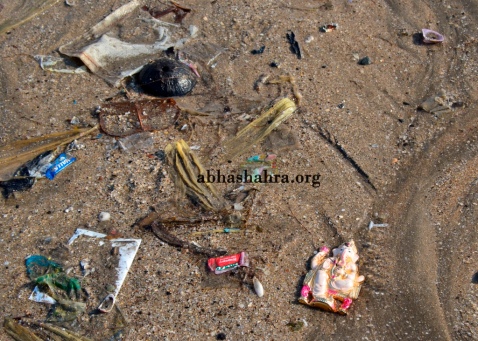 Alone and lonely, This Murti has been in water for months without disintigrating

Devi Maa, She has been disfigured, yet not merged in the earth

This looks like a leg which belonged to some amazing Ganpati

Ganpatiji, maybe waiting for the sea to take Him back, so that He might be saved from this disrespect 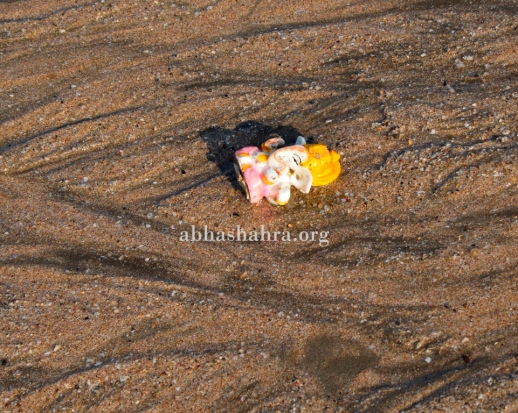 As He stands here, with the crow to keep Him company, does it not cause your heart to feel the hurt of watching God in this dirt and filth.

Lets commit to ourselves that henceforth we will be more careful

Devi Maa, looking out to the sea, as if requesting it to take Her back as soon as possible. These murtis which are not made of natural clay, do not disintegrate and merge with the water and earth, which is the correct type of Visarjan 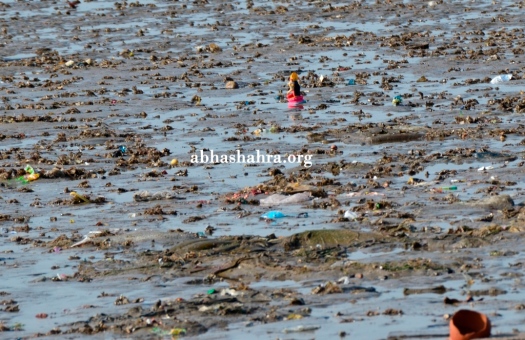 Why does this happen? Does anyone really care?

Lets become more aware, do the right things for the right reasons. If you only buy smaller natural clay Murtis, this will stop happening. Gods will not be subjected to such humiliation. Its all in our hands, its the bhakts decision, of how he wants his Bhagwan to be treated.

The word “visarjan”, in the context of worship or ‘puja’ it refers to the formal concluding rite, in which the presiding deity is requested to depart from the physical embodiment, specifically utilized for the puja (usually a murti) in which it was initially invoked.  This ‘temporary receptacle’ is then discarded, most often by submersion into running water, such as a river or the sea.

The predicament of the washed up discarded murtis after the visarjan is due to our own negligence.  The images depicting discarded murtis of Ganeshji as detritus are highly distressing for Hindus, but are partly of our own doing.  It requires re-educating the masses and insisting that the constituents of the murtis (as instructed by our scriptures) should be of a biodegradable, non-toxic and environmentally friendly nature.

This way the material (clay) used for the deity will naturally dissolve in water, which is the original concept described in the scriptures.

Furthermore, the discarded murtis should be completely submersed (and not just immersed) out at sea, or at that point of a river or lake where it is deep. This will prevent a humiliating fate for the remains of the revered murti.

The most popular images seen during the Navratri Durga Puja and Ganesh Chaturthi celebrations are elaborate murtis made primarily from clay and straws. Clay is formed from sediment including the physical remains of once living organisms, including humans.

In the case of the Ganesh Chaturthi festival, it commemorates the creation of Ganapati Baba and he is venerated for ten days with great fervor.  According to Puranic texts, Devi Gauri molded His original form from exfoliate of her own skin.  She then invoked her consort, God Shiva to breathe life into the inanimate sculpture.  Hence, the process of creating and worshipping Shri Ganesh in the aforementioned method is highly significant and analogous to his actual genesis described in our scriptures.  The Goddess Gauri is represented as mother earth and the clay symbolises her body’s exfoliate from which Ganapati was formed. On the tenth and final day of the festival (Anant Chaturdashi), the transitory embodiment of Ganesh is respectfully requested to depart (visarjan) and then the remaining depiction (now inert) is submersed into water.

2– Bringing a new metal idol and worshiping it:

Where there is paucity of water, consecrate a new metal idol for Ganesh Chaturthi. There is no need to immerse such idol in flowing water. At the time of immersion, place a few unbroken rice grains on the hand of Ganapati and move the idol slightly from the place. Thereafter keep the idol at some sacred place in the house. Next year the same idol can be consecrated and worshipped.

The reason underlying why the metal idol need not be immersed in flowing water: By consecrating a new metal idol and worshipping it, the Ganesh Principle infuses in the idol. For immersion purpose when the idol is shaken slightly, this Principle is expelled. It is not necessary to worship such idol daily. Next year the idol can be re-consecrated and worshipped.