In this post you will be able to hear the katha behind Gopis taking an elephant form for Shree Krishn.

When Shree Krishn was leaving Vrindavan, the Gopis requested Him not to leave. Shree Krishn joked that if they could show Him an elephant, he would not leave. Not being able to find an elephant, nine gopis came together and formed an elephant, which is called the Nav-nari kunjara.

The meaning of this divine leela in the words of the pujari:

A small mandir has been erected here

The earlier mandir was looted and the original murti depicting this divine leela was stolen. Just a couple of years ago this mandir was established by a bhakt, and a painting is being worshipped at present. 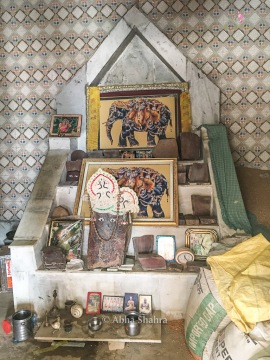 The pujaris who narrated the varta

Giriraj Shila are worshipped here too

Kunjera village is located few kms from Shri Govardhan on the Northern side, towards Radha\Shyam Kund.

The village is not very clean and residents are quite poor. 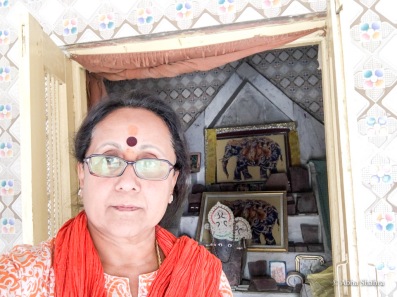