Baithaks in Pushtimarg religion are holy places where Shri Vallabhacharya, the founder of Pushtimarg, narrated the Holy Bhagvad Katha. They are total 84 in number and spread all over the country. Mahaprabhuji had circled the whole of India three times and done sthapna of these various Baithaks.

Each Baithak has its own particular Charitra (description).

Baithaks are holy places where there is no Idol or Chitra (Picture); sewa is done of Gaddi (Seating).

Baithaks are a very important pilgrim place for all Pushtimarg bhakts, as Shri Vallabhacharya is their primary Guru.

It was on Vaishak Vad Giyaras (11th) in Vikram Samvat 1535, or AD 1478; in Satbhisha Nakshatra on a Thursday; during the Abhijit mahurat, 12.40-1.00 in the afternoon; when ShreeNathji’s Lotus Face Appeared from Govardhan to give His divya Darshan to the lucky people of the village; According to Shree Krishn’s desire, on the same day but in the Abhijit mahurat, 12.40-1.00 at night, Shree Vallabhacharya also appeared at Champaran in a ring of fire.

(Details of his life and teachings, can be read on my website:

Here are some pictures displayed from my visit to the 70th Baithakji of Mahaprabhuji, located at Godhra, Gujra 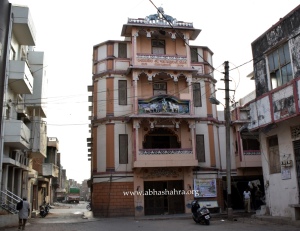 At Godhara, Shri Mahaprabhuji stayed at the home of His disciple, Rana Vyasa. Before he tookinitiation, he was a great scholar of the shastras and was very proud of his extensive knowledge. Once,when he was defeated in a debate, he was so depressed that he decided to drown himself in the Ganges.At that time, Shri Mahaprabhuji was making His prayers on the nearby bank and Krishnadasaji askedhim what was the fruit received on drowning oneself in the Ganges. The guru replied, “That soul wouldundergo seven hellish lives and would achieve no fruits here or elsewhere.”

Overhearing these words, Rana Vyasa approached Shri Mahaprabhuji and surrendered to His lotus feet.Rana Vyasa admitted the reason for his unjustified act. Shri Mahaprabhuji showered His Grace Divineupon him by accepting him in the Path of Grace. He then taught him a small, four versed doctrine

(Chatuh Shlok) and assured him that he would now be able to defeat anybody in debate.

After seeking permission from his guru, Rana Vyasa returned to the debate with loads of confidence.Within a short time, he defeated the opponents. Pleased with the victory of His disciple, ShriMahaprabhuji granted him a beautiful idol of Shri Nava Nita Priyaji, which he devoutly served at hishome in Godhara.

When Shri Mahaprabhuji visited his home in Godhara, He initiated his wife and explained to them thechapter of Venu Gita from the Bhagavata. 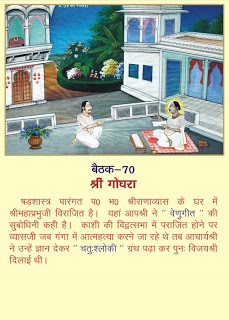 (Details of the charitra is taken from the website: 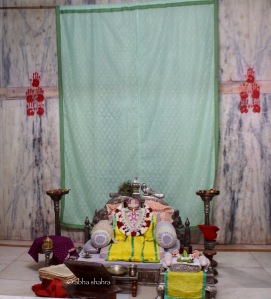